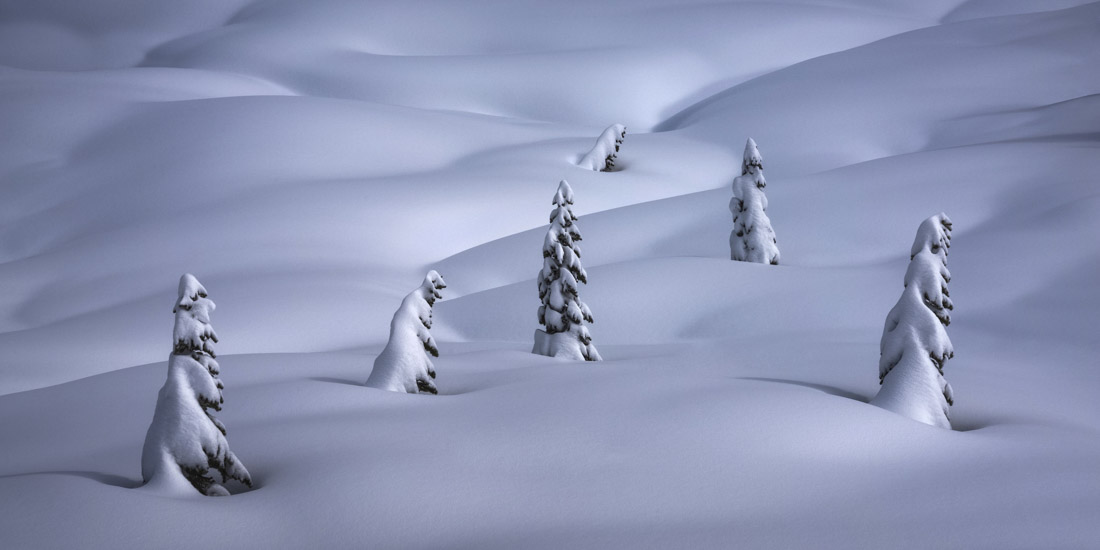 I’m honored that the judges appreciated these images as much as I enjoyed making them! We all, as nature photographers, have surely chased wide, grand vistas and colorful skies at some point or another. But the first and second-place images, “Hibernation” and “Funnel Factory”, are the most satisfying type of image for me to make. Almost abstract, in soft light, and isolated. They were made at a couple of my favorite places – Mount Rainier, Washington, and the middle of the desert in Utah. The image of Mount Whitney, California, is likewise my ideal type of mountain image – a tighter panoramic portrait that shows the details of the peak in dappled storm light. All of these images are among my personal favorites, so thank you to the judges for rating them so highly! 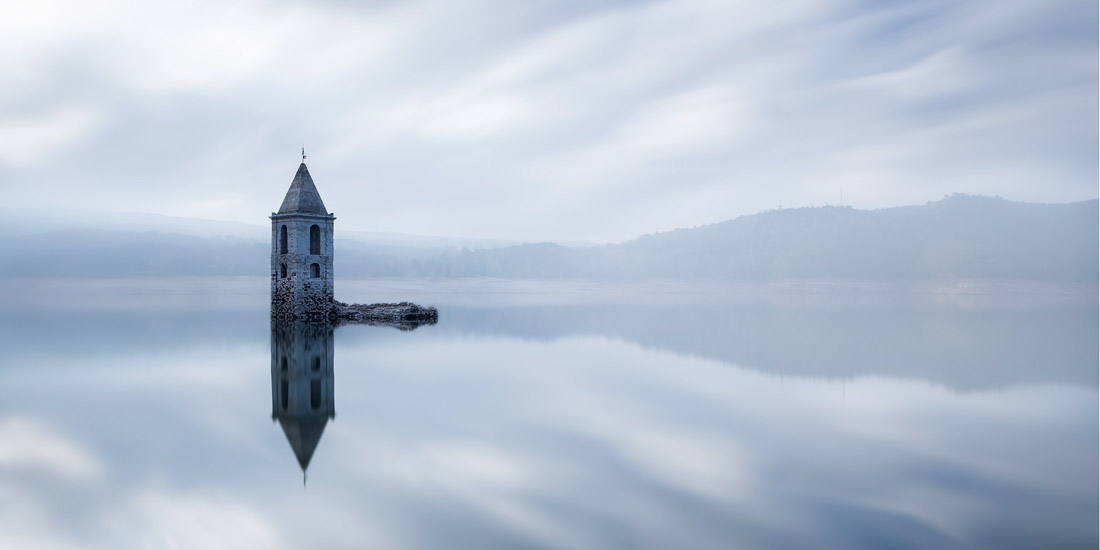 When about 5 years ago I started to do seriously long exposure photography, I I read a story about the Sau swamp in Barcelona, illustrated with a picture of the church of the ancient village of Sant Romà de Sau, which only is exposed when the levels of the swamp are low , at that time I thought “it would be awesome a long exposure of this !!”.

Since that time this image has been in my mind a long time, but I didn´t find the conditions, with a lot of rainy winters the level of swamp was always high with no news about the submerged church.

This year, with a particularly dry winter, I was again head the idea of this picture and I thought it was a good time to try. I studied for weeks evolution of swamp´s level and when I knew It was at the perfect point, I was lucky to find some cloudy and windless days …. so once in the swamp everything was easy, and even knowing the work that behind, all boiled down to shoot and enjoy.

It really makes me proud that these three pictures chosen by the jury won me the title of  the “Epson International Pano Awards Amateur Photographer of the Year 2016“ as they all have one thing in common:  Each of those pictures are in the TOP 10 of my personal favorite panoramas that I have taken in year 2016 and each of those pictures have a story. No one was an easy snap and as a full time dentist it is sometimes hard to live your (photographic) dreams next to your everyday business. So I made a virtue of necessity and focused on starscape photography mainly, being able to capture my dreams ‘after work’.

The Milky Way panorama has been taken on a peak next to my little hometown in Tyrol, and you even can see the lights of my city in the valley. Though it has taken me 2 years and several fruitless trials to realize that planned shot due to bad weather conditions on that mountain.

The three peaks of the “Tre cime di lavaredo” in the Dolomites are probably one of the most often photographed spots within the Dolomites or even within Europe and I wanted to find a different angle at that location. I had to scramble over some rocks off the beaten paths to find that spot that I already had planned virtually at home. Finally I found that place and the weather gods meant well for me that evening and gave this magical light during sunset.

After all my personal favorite is “The Photographer“ on the top of that sand dune in front of the Icelandic Vestrahorn. My buddy Niki Haselwanter was struggling to stand his ground on that sand dune for the exposure while being sandblasted. Blizzards kept on hitting the coastline that night. But during the short gaps in the clouds we were able to witness wonderful northern lights over the Vestrahorn. The clearing gaps only lasted for a few minutes so we had to be quick to take our shots before the next blizzard was hitting us again.

This is a Metro station in Gelsenkirchen which is below a place where coal mine Consolidation was up and running between 1848 and 1993.

This picture is part of series Colored where I’m traveling through Europe e.g. Munich, Frankfurt and Hamburg to catch the beauty of Metro stations and combine it with the dynamic of passing Metro trains.

The Beauty Of The Pit Cave, Mexico 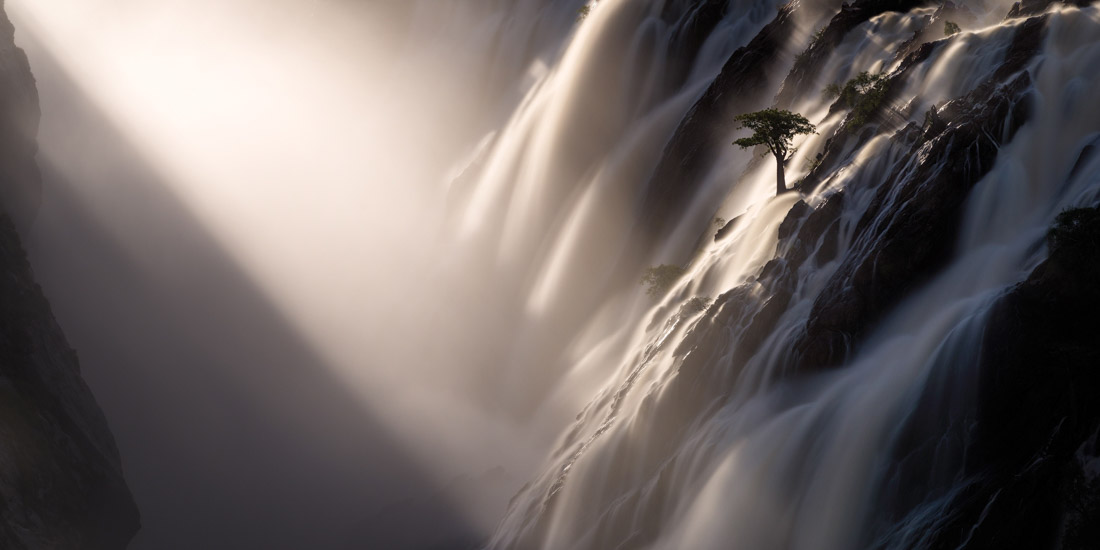 Will to Live, Ruacana Falls, Namibia

Namibia has always been a land of extreme juxtapositions and this image is no exception. While the majority of the country is in one of the worst droughts of the past century, it’s border to the North; the Kunene river, was flowing in full force for most of February and March this year. This was thanks to plentiful rainfall in the highlands of Angola. Driving through a drought-stricken Namibia for days to eventually arrive at the mighty Kunene plunging down this gorge, was an experience I’ll never forget. Despite having a full two days there, I was immediately overwhelmed with the panic and fear of not capturing this majestic and ultra-rare display of nature. After a lot of exploring I eventually found this angle and the ideal composition of it. In the frantic shooting I broke my Lee Little Stopper, but luckily only after I captured this frame.

I am completely overwhelmed and grateful to be the winner of this award. It carries two special meanings to me – The first is that it’s in honour of Carolyn Mitchum, who recently lost her battle with cancer. The primary artistic influence in my life was my mom, who I also lost to cancer several years ago. I’m humbled that I can honour the two of them with a photograph of mine – a special thanks to Jeff and his late wife. The second reason is what this reward represents – honesty and integrity in photography. In a time when the hype is all around post processing and making images on the computer, I’m proud to be able to show people that striking images can still be made almost entirely in-camera. People need to be reminded of the merits of chasing the light and making images in the field and how rewarding it is when the hard work pays off. 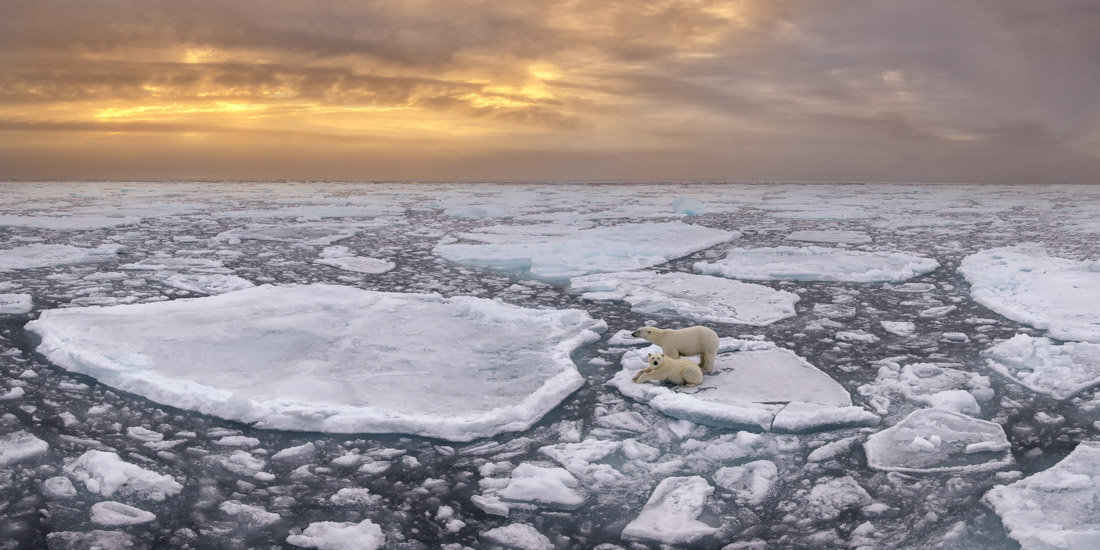 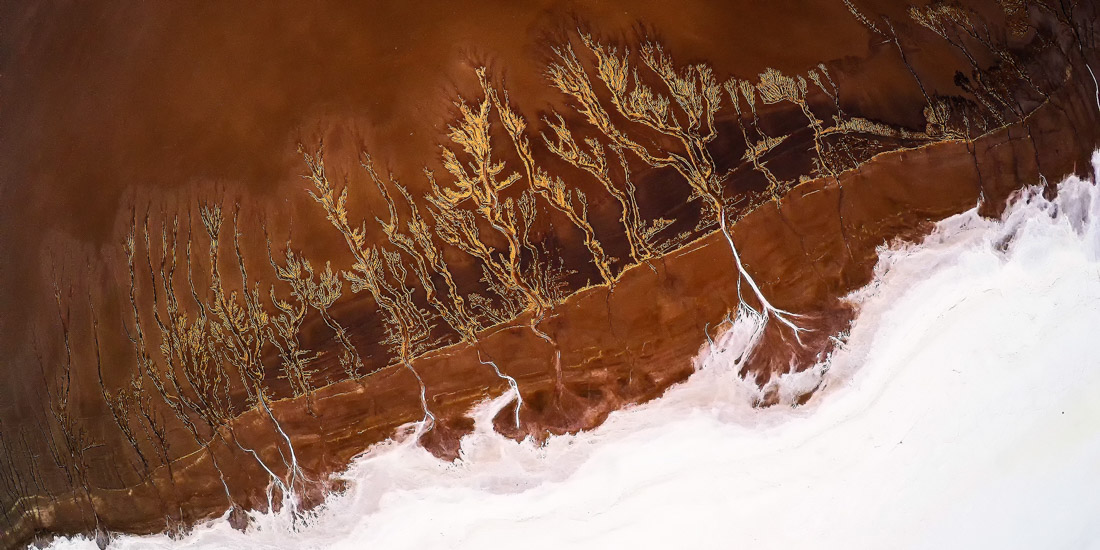 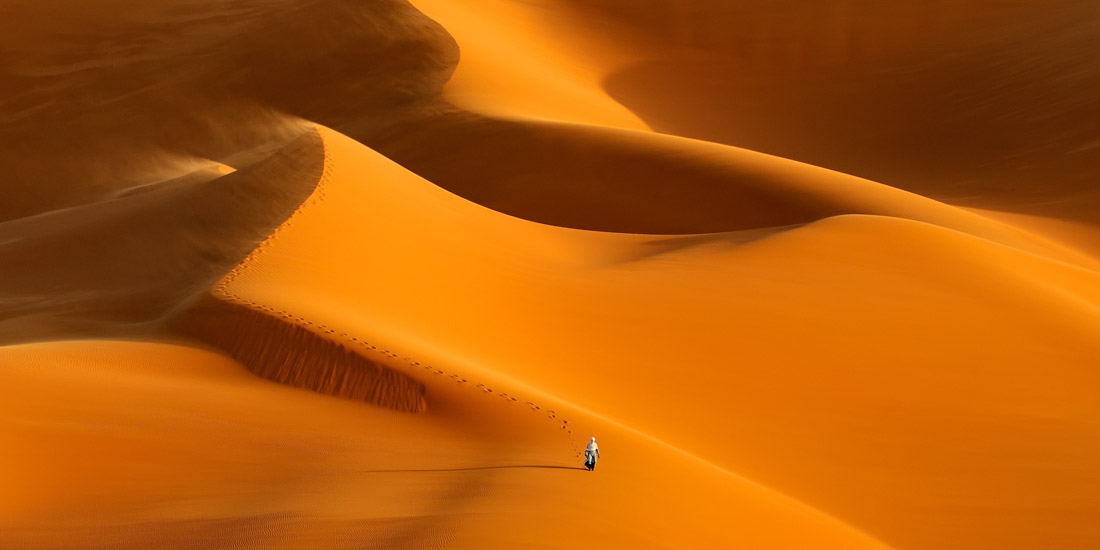 I had spotted these dunes a couple of days earlier when the light was harsh, and I noticed that it would look a lot better around sunset and with wind. A few days later there was quite a bit of wind, so I decided to go back to shoot it. I asked my tuareg guide to walk all the way up the dunes from behind the ridge (so I wouldn’t see his footsteps going up), and then walk back in my direction following it. The wind created these wonderful clouds of sand blowing off the ridge, and the low sun created an incredibly long shadow that, even though it’s just a line, adds a lot to the shot. It’s one of my favorite images, so I’m pleased it was awarded. 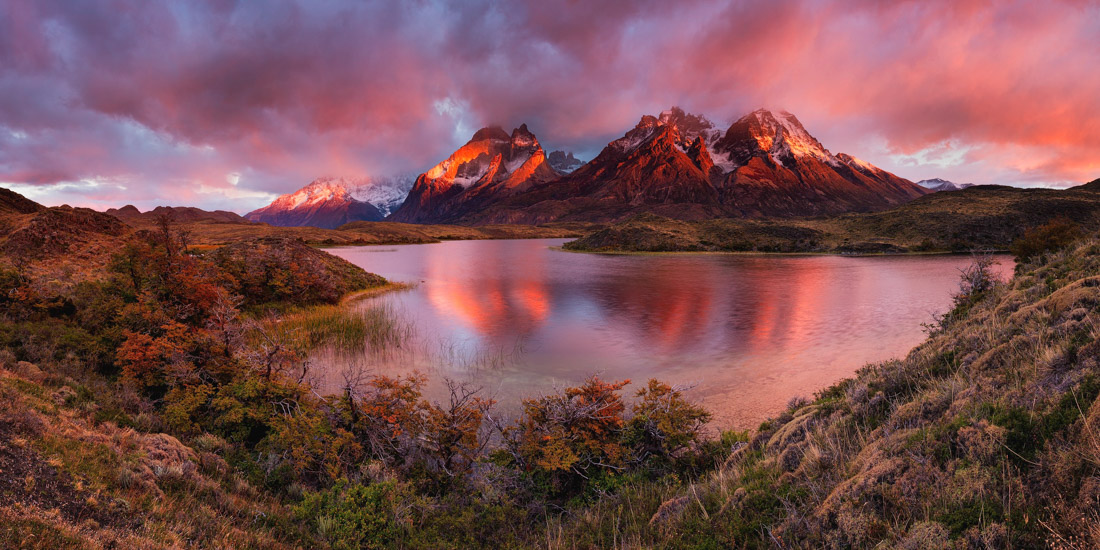 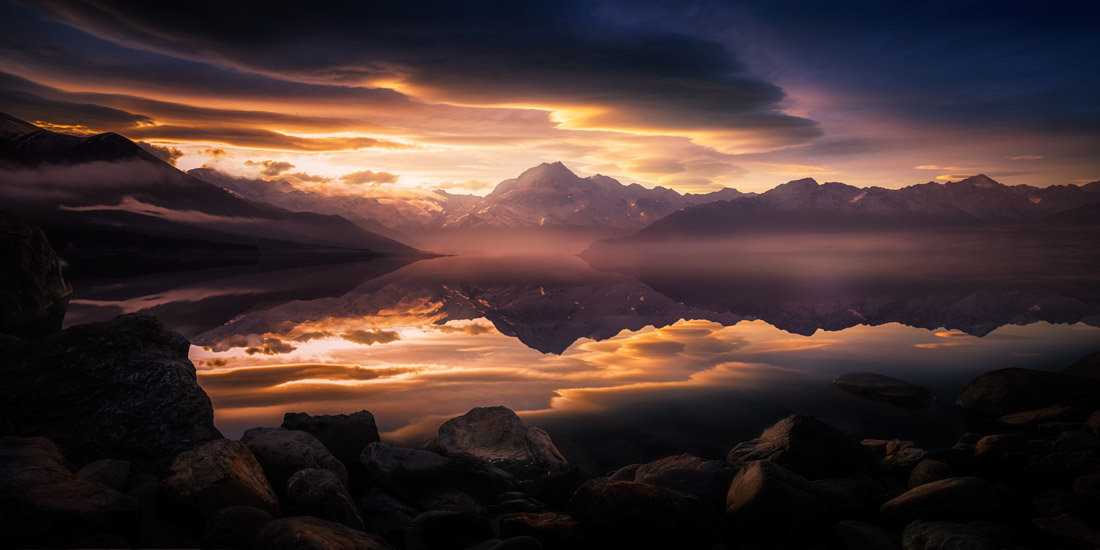 From The Inside, Canadian Rockies

I’m really overwhelmed by the message of that great achievement on this really important competition. It’s a big an honor for me that my work made it to the top of the One-of-a-Kind Extreme Moment Award. I’m sure it wasn’t easy to pick out one Panorama out of all those awesome photographs you must have received. Winning this amazing trip to the Antarctic tells me that I’m on the right way and I can’t wait for this next adventure to begin!

The day I took this panorama I spent about 2 hours exploring that area searching for a good composition without any satisfying results. I started to get kind of desperate when I saw that the light started to get quite amazing. I made the decision to grab my snowshoes and just walk into the woods, not knowing if I’ll find something good or probably miss one of the best conditions I might have during my stay there. I finally found that creek in the middle of all that snow. I knew this could be a unique composition with all the light hitting the ice cycles. so I got down in to the ice cold water and started to capture the scene. I made a panorama of 9 vertical shots at 14mm to cover as much as possible. I really had to hurry up because my tripod started to made his way down the swampy bottom of the waterhole and the icecap all around the tripod was getting thicker and thicker. at the end of the shooting I was barely able to get out of the swampy waterhole. But when I checked my shots afterwards I knew it was worth it. 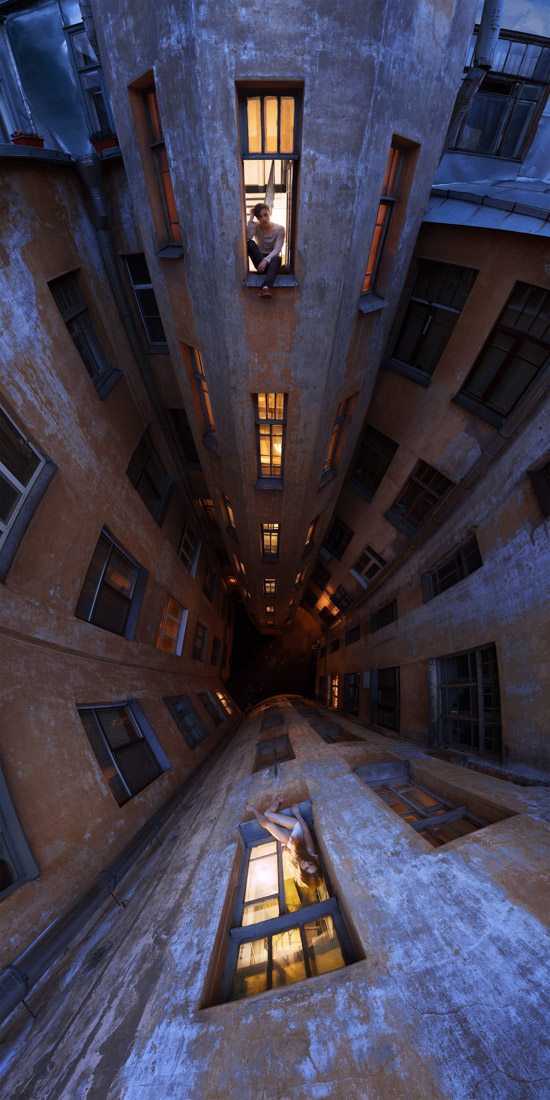 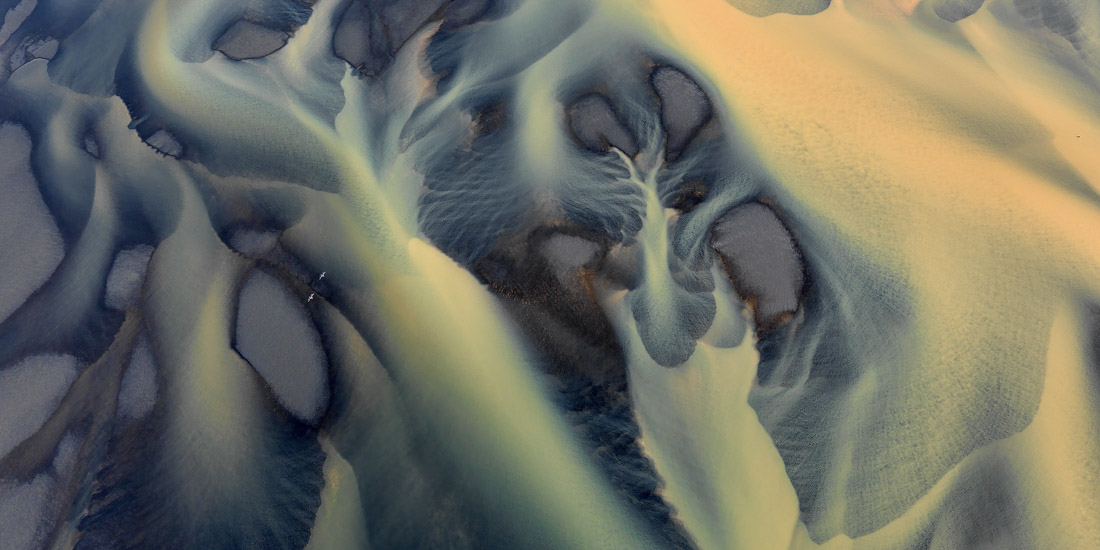 The Press Release can be downloaded here.